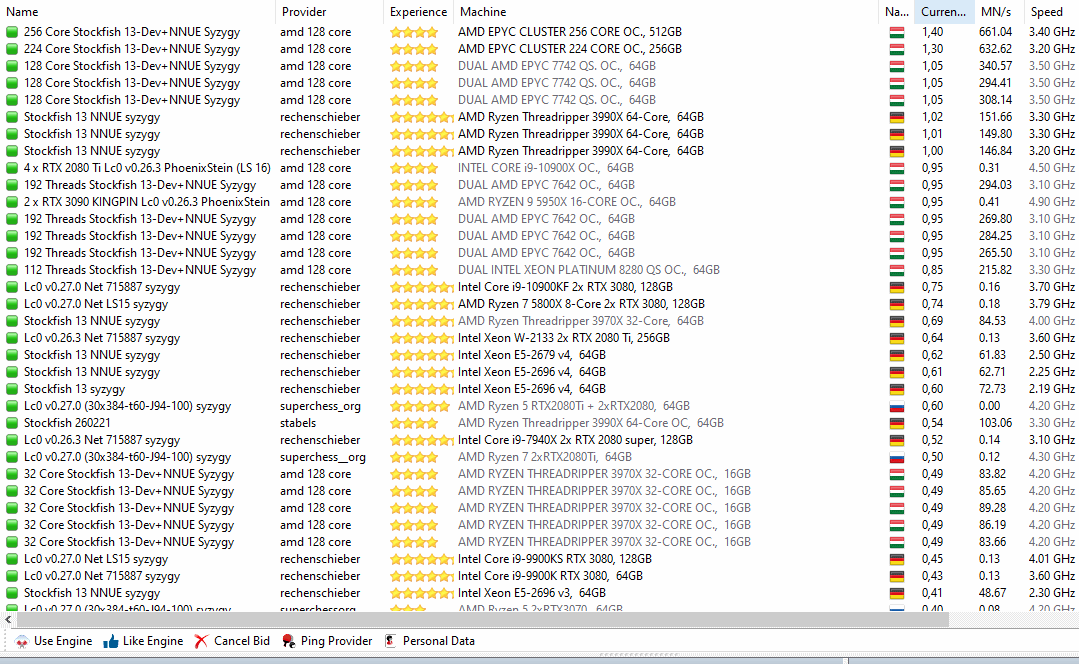 Hardware and MN/s look impressive, but you won't get what you pay for. I made some video clips of his engines - please watch time to depth

>Could it be a scaling issue or latency due to multiple sockets?

>This would also apply to the dual 3090s

The computer I used for comparison has dual 3080s. It should be 10 - 15% slower.
I guess he modified both engines to show higher node counts and recompiled them.

I tested it in a way I knew he couldn't do anything about: on my private tactical testsuite with 100 test positions. I was using two machines:

His machines displayed far higher nps than either of mine, yet his machine had far inferior results on the test-suite and seemed to perform like a quad core.

Date 2021-04-01 07:41
Thank you.
A testsuite of course gives a better impression of playing strength. In fact it wouldn't be too difficult to falsify the indication of search depth.

Did you ever run your testsuite on lc0? I assume it might not be very good in tactics.

When Lc0 gets a position right, it sees the solution very fast, like it just "knows" what move is best. But in other positions it's much slower than the alpha betas.

> It looks to me like lc0 isn't as bad as I expected - and the network is really important.

Sorry to say this, but I am suspecting your card.

Date 2021-04-12 03:02
I don't know why would someone even want to rent there, cpus are very overpriced. I can get a real 112c 224t epyc rome cpu on google cloud without having any doubts that the provider is screwing me for like less than 1 usd an hour on preemptible instance. Or if you want to get real crazy, azure offers 208c 416t Mv2 spot instances for like 5 usd an hour.

Also xeon v4s aren't really premium anymore, I can build a dual 2673 v4 40c 80t system for like less than $1k on chinese aliexpress. And you can even turbo mod some of these chinese motherboards so that cpus get higher clock speeds.

How would that work if you had Aquarium on your local machine and wanted to use the 416T as an analysis engine?

Meanwhile he found out he misspelled his Xeon Paltinum / Platinum

I made a few more video clips of his engines - this is what he claims to be a 256 core cluster:
http://www.abdul-h.de/Clips/ckEpyc256.mp4
MN/s are much lower now, time to depth is better - but not better than a 64 core Threadripper 3990X

In all lc0 tests the same network was used: LS16 =  PhoenixStein

Btw. the Chessbase cloud gets cpu and speed info of the pc you let for rent. But you can edit that info. If you do so, "Machine" is printed in grey, if you don't touch that info, it will be printed in black. There is one exception: If you choose "cluster controller" all info is black regardless what you write.

Has anyone tried some "cluster king" engines? Results from test sets or any other test would be highly apprecicated.