Date 2010-11-29 07:11 Edited 2010-12-14 14:10
The 30th Dutch Computer Chess Championship in the computer chess mecca of Leiden Holland has finished and Rybka has won ahead of Spike, Deep Sjeng and Hiarcs, who all finished in a three-way tie for second. A big thanks to the organizers for an excellent tournament with a strong field and an informative website, and a huge thanks to Lukas Cimiotti, Jiří Dufek and Hans van der Zijden for their dedicated preparation, as well as to Jeroen Noomen for his help.

Lukas Cimiotti again ran Rybka for us on his massive cluster. I'm often amazed at the speed and sheer relentlessness with which Lukas makes improvements, and this time was no exception. Between June and September of this year Lukas had made a big push to upgrade his cluster, overhauling the parallelization and administration, automating various common operations, physically splitting the cluster into two parts, and nearly doubling the number of boards and cores. The last two months were mainly a cleanup and consolidation period - we reviewed everything, tied up loose ends, fixed some bugs, restructured the hardware, cleaned up a bunch of code rot, ran lots of tests, and tuned some of the cluster's parameters. The attached picture shows the newer half of Lukas' cluster. 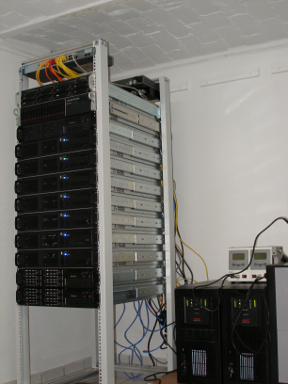 Lukas also upgraded his home's electrical capability and added five new boards carrying ten new sockets and sixty new cores. His current cluster consists of thirteen boards with eight cores each plus thirteen boards with twelve cores each, for a total of twenty-six boards and two hundred sixty Intel Nehalem cores, all running at clock speeds of 2.93 GHz and up.

Jiří Dufek handled our opening play. He built on top of his preparation for Japan, which was built on his Rybka 4 book. His focus this time was on testing as well as on improving the black repertoire. Book wins with white are nice and flashy, but the ability to fully equalize into complex positions with black is probably even more critical to tournament success. Jiří preparation worked splendidly - our white positions were excellent and quickly improved further, while our black opening positions were all at least equal equal and forced white to make many tough decisions.

Jeroen Noomen acted as an advisor and sounding board for Jiří.

Hans van der Zijden was our operator and representative. Hans is also the new editor of "Computerschaak", the Dutch computer chess magazine - congrats to Hans for this appointment!

There were several interesting games. We had tough struggles against Spark and The King, and also finally a nice win against Deep Sjeng where black seemed to lose without doing anything wrong. My favorite game though was the following:

Jonny, the 2006 Chess 960 Vice-Champion now running on 800 cores, has just played the provocative 15. h3, leaving the knight on g5 dangling. Black dreams about things like .. Nh5, .. e6-e5 and .. f5-f4, but this would weaken the central light squares and provide nice outposts for white's knight on c3. After a few minutes of analysis, Lukas' very inhumanlike 260 cores came up with a very humanlike solution:

Giving white a tough choice. If he doesn't capture the a-pawn, then black will defend it, permanently freezing white's queenside and even leaving white with the annoying .. Na5 to worry about. And if white captures ..

White tries to calmly improve his position, but in fact the situation was already critical here and he probably needed to play with more urgency.

With white's knight deflected from c3, black is no longer concerned about the holes on d5 and e4, and so the attack rolls on.

Date 2010-11-29 07:43
Nice!  The Cluster looks a lot cleaner and leaner and more streamlined and more professional

My only comment would be that maybe latencies would be improved if LAN communication was replaced with a fiber optic LAN setup. It sure looks a lot better than a bunch of desktop computers cluttering a room!

Date 2010-11-29 08:17
I suspect that the most cost-effective way to improve the cluster's performance is to add cores, rather than to push the clock speeds or the LAN speeds. In fact, ideally, Intel would stop "spending transistors" on things like caches and improved microarchitectures and spend them on cores instead - that's what made the Tilera thing kind of interesting.

Date 2010-12-05 18:16
After further analysis of the games some of the opening preparation on the part of rybkas opponents was sub standard-------No body doubts cluster rybka strength but some improvments in opening against it would i think amount to better games.

If u play the cluster coming out of book in a sub standard postion will just lead to a lost game.

So some room for Improvement in the book making department but a great tour by rybka..