After a slow start Lc0 is winning most opening-pairs 1.5/2, often consecutively.

I have a few days off and was looking at game 39 - K_Dragon's loss with white.  Really don't understand white's play in that game. Especially after 18. Ba6.  Lc0 and Stoofvlees were showing b5 and a5, respectively. 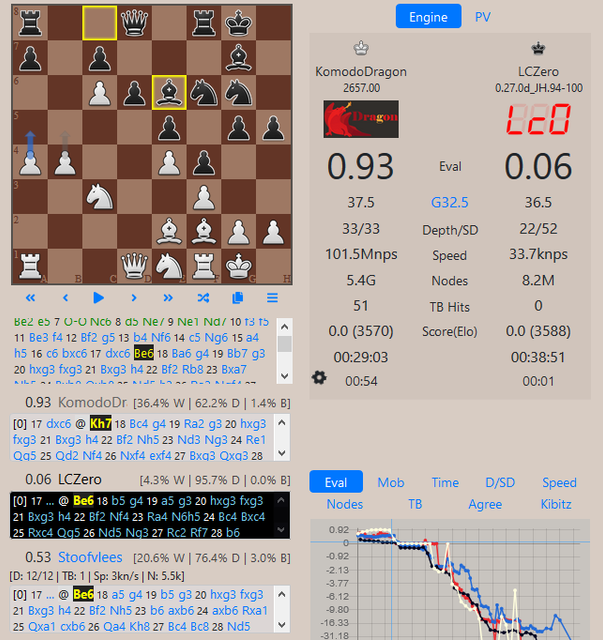 This is getting very repetitive, but thanks again, Mr. Kris.  I still travel a lot on the job (inside of Alberta) and these analytical posts/threads really are a treat in the evenings. I don't have a lot of options in those motel rooms and the talking heads on television often (usually) can be very annoying. . .

(Unfortunately I will not be able to post much for the next week or so.)

Thanks for pointing out game 39, the only black win so far.
One of the better engine games I've ever seen, I think.

Sometimes Lc0 is called "positional", its exchange and two pawns sacrifice after 28...Qxb8 looks Tal-like to me: a 'positional sacrifice' without a definite forcing continuation, at least as in human vs. human over-the-board.
After that I was very impressed with Lc0's tactics.

Years ago, about a Komodo I had purchased in a game I made, I wrote somewhere something like 'it seems to give itself a bonus for the distance its pieces are away from its own king, the farther the better.' A bit of a joke of course about that particular game.
In the TCEC game it had 26.Ra3 0.00 - definitely giving black compensation for the material, but unaware of the danger.

My Stockfish was looking at 25. Nd3 but I'll see what my better system says when its back up.

> Not a good week for the Komodo guys.

Kudos to TCEC for running these bonuses. In other events, Div P and over at CCC, the very top engines (Stockfish, Lc0, Dragon, StockfishClassic and Komodo classic) do well but they play each other relatively few games.

Just the first Arena "print" over 3 minutes with various old Komodo's from when I was a purchaser:
(I stopped buying it just before NNUE & Dragon when I thought Komodo was falling further and further behind Stockfish pre-NNUE.)

--Then below that is an example of 'game mode', even blitz, being better than analysis.
After the game it took Stockfish a long time to see how bad 14.Nxc7 is for white,
but in the game it said 14...Rf6 +(for black)2.09 right away: