Big thanks to Eric van Reem, who kindly allowed us to use his pictures.

Date 2009-08-03 00:33
I could buy one myself, but I don't usually need it. Actually I'm a fan of Diogenes, not having much needs makes you happy. Also I've got some excellent old cameras (my father collected them) and a scanner would in fact be enough, but taking photos is an art and I would need to learn it.

Anyway, I could get even much more pictures, there's really no need to make them myself.

Date 2009-08-04 04:58
By the way, you did a really good job cropping the picture on the main web page to cut out the shorts, white socks, and sandals, thus making Vas look presentable! You deserve kudos for getting lemons and making lemonade! :-)

Date 2009-08-08 12:29
I think Vas needs a little more colour, but wearing sandals in front of the computer won't help. Too little radiation from the screen nowadays! Except for certain members which still have a CRT! Also it is Deep Solor Minimum, meaning quiet weather, it is safe to go outside and collect some UV! Soon winter will be there again in Poland, having a continental climate. The Mexican flu may come back for real, it is not impossible, you never know because the Spanish flu did that, and need to build up some resistance! Doctor's advice, schedules can wait, just buy some better testcomputers in autumn and let members test R4- earlier, speed up things ten-fold. Doctor's advice :)

Date 2009-08-08 19:58 Edited 2009-08-08 20:01
To help Nelson Hernandez recover from the shock of seeing those pictures and as an example for Vas, how he could have dressed for that prize giving ceremony in Mainz, some pictures of what chessplayers used to wear, back in the good old days: 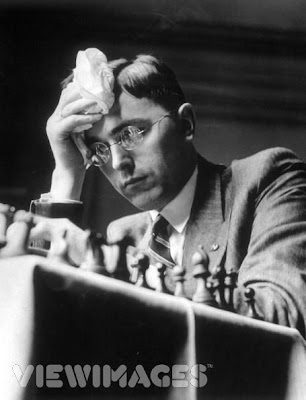 Max Euwe, imagine him wearing shorts, perspiring or not, always dressed as a gentleman :)

Date 2009-08-08 23:28
Petrosian is too casual in that photo.  Looks careless.  Imagine if he got a proper haircut and wore a dark suit, white shirt and skinny necktie.  Much better.  Euwe on the other hand is excellently dressed and his spectacles are clearly quite stylish.

Date 2009-08-08 23:26
I have already berated Vas on this pro-communist garb of his.  But just look--LOOK!!--at my friend Jeroen here.  What an appalling spectacle!  Good God, it beggars description.  Think what a wonderful example these men would be for us all if they were both decked out in stylish suits straight out of Gentlemen's Quarterly.

Date 2009-08-09 06:18
And just immagine trying to tell to someone outside of chess comp world that those 2 characters on the above picture are able to produce the most powerful chess playing skill in the world. Yeah, right.